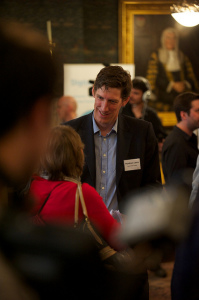 Dr. Meg Jay, author of The Defining Decade: Why Your Twenties Matter—And How to Make the Most of Them Now discusses the notion of “weak ties” in her enlightening book about young adults. She postulates that twentysomethings who are attempting to define themselves both professionally and personally should reach out to those people they do not know well to help find opportunities for growth and development. While it may seem counterintuitive, she states her argument as follows:

Weak ties are people we have met, or are connected to somehow, but do not currently know well. Weak ties are also our former employers or professors and other associations not promoted to close friends … Weak ties give us access to something fresh … like bridges you cannot see all the way across, so there is no telling where they might lead.

This notion of weak ties is especially interesting when we think about twins.

Twins often value their connection above all else, but the twin connection can be an asset or a liability. Sociologists at the Budapest conference for the International Twin Society for Twin Studies and the World Congress of Twin Pregnancies presented a paper entitled “Twinship as a Resource” (Hegedus, Pari, and Drjenovszky. “Twinship as a Resource.” Twin Research and Human Genetics 17, no. 5 (2014): 440-441). They identified three variables that contribute positive consequences to a twin relationship. The first variable is material, twinship as an attraction; the second is cultural, twinship as an attention-getting behavior; and the third is relational, the asset of a dyadic connection. They concluded that the Hungarian twins in their study enjoy their twinship and benefit from the attributes it provides.

Dr. Jay believes that young adults who are capable of taking risks, managing rejection, and making commitments have a greater chance of developing strong identities. She adds that what accompanies a stronger sense of self is greater self-esteem, a resistance to conformity, a capacity for stronger reasoning, and an increased resilience to weather life’s ups and downs.

How difficult is it for some twins to have opportunities to reach out to weak ties rather than defaulting to their twinship? We read so much about how twins work beautifully together and establish businesses and professions based on their creative synergy. Yet I have worked with a number of twins who began their careers in this fashion but ultimately longed for a chance to see what they could accomplish alone. While the separation was prolonged and painful, a number of them ultimately did strike out on their own. They felt enormous relief and an enlivening sense of pride and joy realizing their singular capabilities—a state of being they had not been able to access previously out of deference and loyalty to their twin.