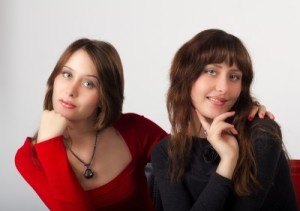 9Instead of thinking how lovely it is that twins care so much about each other, when I hear a sentiment such as the one above, I worry. I imagine the overly dependent relationship that most likely exists between the twins. What may begin as a compatible, caretaking, and harmonious twin attachment can turn into a relationship where one or both twins feels trapped and powerless and yet clueless and fearful about change. At some point, one twin usually desires more freedom because the burden of this ongoing interdependence with her twin becomes unbearable.

When one twin in the dyad assumes a parentified role, she becomes hypervigilant about keeping the emotional climate calm and peaceful. Usually longstanding issues of jealousy and competition have not been addressed, articulated, or expressed. The parenting/caretaking twin is held hostage in this role because she feels obligated to keep her twin happy and content.

When her own needs or feelings bubble up, she hopes her sister will be sensitive and respectful to her. Unhappily, she repeatedly encounters a selfish and angry sibling who is not at all concerned with her. The “cared for” twin expects that her sister will figure out what she needs and will be compliant and loving no matter how badly she behaves. In a matter of speaking, the cared for twin emotionally blackmails her sister by refusing to go along with what she has decided is best for the pair. When her twin refuses to comply, often the parenting twin becomes anxious, distressed, and angry. She requires that her sister go along with her program so that harmony is maintained.

One young man in his late teens described to me what happens when his twin brother does not follow his agenda. When working on a joint project that requires shared participation and cooperation, his brother may get mad over some trivial matter and then refuse to continue working. Consequently, he deliberately holds up the project, enrages his twin, and exercises passive-aggressive behavior. The parentified twin is often confused and mystified. Why is his twin treating him like this when all he tries to do is make his twin happy?

The parentified twin worries excessively if his twin is upset or sad. Usually, the parentified twin ends up giving in to the misbehaving twin because his ultimate goal is to avoid conflict. He is fearful about becoming more independent because he does not feel confident being on his own or relinquishing this role.

This dynamic borders on enmeshment, which means that two people have limited capacities to act as separate individuals. Being a separate person presupposes that one can tolerate disagreements, appreciate another’s perspectives, and feel entitled to one’s own feelings and needs. Helping young adult twins confront this troublesome conundrum is certainly possible; however, the longer twins remain in such an attachment pattern, the more difficult it is to disengage. A twin connection can be a complicated dyadic system.

Please share your experiences with caretaking and receiving roles in a twin relationship in the comment section. Your perspectives and insights are welcomed.