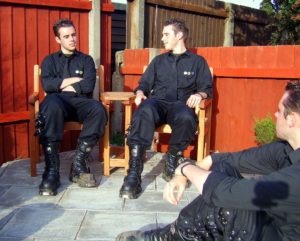 The documentary Three Identical Strangers reveals the story behind the uncanny, mystical reunion of nineteen-year-old identical male triplets who had been separated at birth. The details of the boys’ adoptions are horrific—the boys and their adoptive parents were deliberately uninformed about the boys’ siblings, and the adoption agency collusively conducted a secret experiment on nature versus nurture variables using adoptees.

Dr. Peter Neubauer, a prominent child psychoanalyst at the time and the head of this experiment, was a proponent of ego psychology. Back in the sixties, this theoretical orientation propagated Freudian drive theory. According to Freud’s beliefs and teachings, an individual was a collection of his oral, anal, and sexual instincts. The notions of connection and interpersonal dynamics were not recognized as viable or noteworthy by those invested in ego psychology. In fact, such beliefs contradicted the indisputable tenets of Freudian psychology. Dismissed and devalued by their Freudian brethren, interpersonalists were excluded from participating in the holy sanctum of psychoanalysis because of their unorthodox way of understanding and treating patients.

Neubauer and his colleagues were intent on examining how the interplay of nature and nurture affected psychological development. As we know today, making a dichotomy between the two variables is ludicrous. From the time a fetus begins to grow in the womb, it is already engaged with both nature and nurture. Thinking of them as separate components is actually unscientific and misleading.

An important fact only briefly referenced in the film is that the boys were separated from one another at six months of age. By that age, that the brothers were likely each other’s most significant attachment figures. Having lost their mother, they found solace, comfort and familiarity in each other’s company. In fact, one parent’s comment about her infant’s headbanging is striking. Headbanging in infants is often a sensory behavior connected to traumatic loss. These babies attempt to combat emptiness, loneliness, or a sense of dread with a self-harming, self-stimulating behavior in order to feel alive. If the adoptive parents had been informed about the other two boys, they might have better understood and handled their son’s adjustment to a new family and a new life.

While many other variables are left a mystery, the information provided in the film certainly paints a sad and upsetting picture of the lives of these three men. Highlighting the ebullient reunion of these charismatic nineteen-year-olds and noting repeatedly that they all smoked the same brand of cigarettes made their story seem like a fairy tale. The triplets’ quick fame and fortune resembled those of present-day reality television stars. In contrast, the pain and suffering that these men endured after their business and their connection fell apart leaves one feeling enraged, sad, and disappointed.

My hope is that after seeing this documentary, people will react differently to stories about twins separated at birth. Instead of getting caught up in the excitement of seeing identical faces and habits, people will think more deeply about the underlying issues. Rather than waxing poetic about twins’ extraordinary external likenesses, a public fascinated with multiples needs to appreciate how early separation cheats them out of the experience of growing up together and getting to know one another as siblings. We must recognize their differences and individuality—not just their identicality.