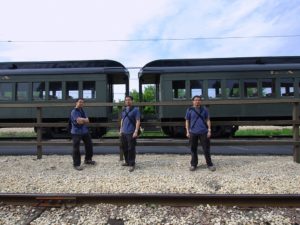 I was very moved by Ella Taylor’s review for NPR about a recently released documentary called Three Identical Strangers. While I have not yet viewed the movie, I have read about the three adopted men who were coincidentally reunited in their late teens by quirky acts of fate. The reunion of multiples separated at birth is an inevitable media sensation. When I mention that I am a psychotherapist who specializes in twin issues, nine times out of ten, people’s first thought is about the fascinating cases of twins who find their long-lost double and discover their astonishingly similar habits and traits.

Ms. Taylor wrote about the triplets’ experiences after reunification with an evenhandedness rarely articulated in articles about multiples. In her beautiful prose, she described how the boys’ finding one another led to both positive and tragic outcomes. Ms. Taylor wrote:

Their celebrity status was predicated on their sameness, and for so long as they could play along with the packaging, it was all so super-cute. Until it wasn’t, and here the boys’ story, or stories (the plural bursts with significance), went from amazing to incredible to very, very dark.

The exposure of the adoption agency’s covert plan to conceal the boys’ triplet status and deliberately separate them into three different households under the pretext of scientific research added traumatic and egregious aspects to the heartbreaking story. What I most admired about the article was the reviewer’s appreciation for how artfully the documentary’s director Tim Wardle captured the raw ambivalence of the men’s experiences. Ms. Taylor ended her article by describing a scene at the end of the film when the two surviving brothers get together:

What really breaks the viewer’s heart is the nervous unease with which they greet each other, two identical strangers who were once close but seem not to have met in a while, and who seem to have lost the one thing that we assume twins should be able to count on. Trust.