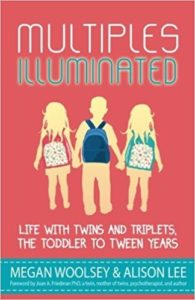 I was recently asked to write the foreword to the second anthology of Multiples Illuminated: Life with Twins and Triplets, the Toddler to Tween Years, which was just published. Once again the editors, Megan Woolsey and Alison Lee, have compiled a collection of beautifully written stories by parents of multiples. The essays are arranged developmentally and chronologically, each one highlighting recognizable familial situations and parenting predicaments. There is a comforting authenticity to the mixture of feelings expressed—anger, frustration, fear, disappointment, and sadness along with joy, happiness, exhilaration, delight, and contentment.

I especially enjoyed reading the story entitled “Individuality, Mutuality, and a Game of Twister” by Andrea Lani. She writes about her annoyance with “experts” who pathologize twin individuality, and she takes issue with the ways in which they suggest helping multiples differentiate. She describes beautifully how her eleven-year-old boys are developing their individual selves without the requisites of alone time, separate classrooms, or different activities. Her story reminded me of the importance of context and how each family figures out what works within the confines of their particular social and cultural milieu.

Here’s what I wrote in the foreword:

At the age of 40, I had a feeling of unfinished business, an incompleteness. I wanted one more child to round out my family: I came from a family of four siblings and wanted to have four children of my own. Already the mother of three beautiful children, ages eight, six, and four, I felt up to the challenge of having one last baby before my childbearing window closed. Even though it was 26 years ago, I vividly recall calling my husband with the news that we were going to have twins. Ever the optimist, he responded to my shock and dismay with the reassuring response, “Well, at least it’s not triplets!”

My primary fear about bringing twins into the world was not the pregnancy or the birth. Rather, being an identical twin myself and having experienced some residual emotional turmoil stemming from my relationship with my sister Jane, I had all sorts of worries and anxiety about how I would raise my own twins. Since I was fortunate to have eight years of parenting under my belt already, I was not excessively worried about being anything more than a “good enough” parent. I did not feel as if I had to prove myself to anyone or justify decisions that I made prior to the birth of my twins, Jonny and David. I came equipped with my own ideas about how I intended to raise two very individuated sons so that they would not suffer as much as Jane and I did in attempting to define and create our separate identities.

Not long ago, Jane shared a story with me about an incident that occurred when we were in high school. At that time, academically gifted students were given the opportunity to take an exam to determine eligibility to take a year-long college-level course at a prestigious university. Jane qualified for the honor, and I did not. She attended the college course for only one semester. She confessed that she deliberately decided not to attend the second semester because she felt guilty that I had not qualified to do what she had achieved. I was aghast and sad to hear about the personal sacrifice she felt she had to make in order to preserve our connection.

Many parents raising twins are so conditioned by popular notions and fantasies about twins that they shy away from thinking outside the box or taking actions that might be considered by others to be wrong, dangerous, or unconscionable. However, I felt liberated and excited about embracing counterintuitive parenting approaches that might lessen the stigma imposed by the “twin mystique.” More often than not, the non-twin world lumps twins together and sees them as “identical”—even when they are a boy and a girl!

My husband and I decided that we would not tell anyone which boy was “older.” As I had always been identified as the older twin by virtue of my entry into the world three minutes before Jane, I wanted my sons to be free of this burdensome label that means absolutely nothing—especially in the case of a Cesarean birth where one baby is pulled out literally seconds after the other. Also, the boys had distinct-sounding names, not alliterative ones, and they had middle names, too. Jane and I were assigned a middle initial according to our birth order (Joan A. and Jane B.) rather than given proper middle names like our other two siblings. In addition, I made sure there were separate pictures of each of my sons, and made two baby books with shared and single photos. I took each boy out alone as much as I was able and did not introduce him as being a twin. I spent a considerable amount of time using my single stroller, getting acquainted with each twin’s distinct personality and temperament.

As you can imagine, my husband and I were too overwhelmed to maintain the schedule and structure that we’d had with our three older children. On more nights than I care to admit, Jonny and David fell asleep on our bed along with our Labradors because we did not have the energy to get the boys to their room. Our older children will tell you that their brothers enjoyed a comparatively more lenient and indulgent upbringing because our parental fatigue overpowered our capacity to impose schedules and rules.

Nonetheless, Jonny and David benefitted immeasurably from the love, attention, and guidance provided by their older siblings. My daughters dressed them up and played games with them, and my son—the oldest child—initiated lots of physical activities that they all enjoyed. Even though my younger daughter, who was four when she found out she was having twin brothers, superciliously instructed us to name them Shit and Pooh Pooh, she grew to love her brothers.

I must say that I enjoyed parenting Jonny and David so much for two primary reasons. First of all, not being a first-time mom freed me from some of the constraints of conformity and social acceptance. For example, my husband and I let Jonny and David’s hair grow quite long because we loved their blonde curls. However, this situation dramatically changed one day. We were at a friend’s home swimming and the boys had no bathing suits on—they were about three years old at the time. An inquisitive four-year-old girl looked at Jonny and David and then walked over to me and asked, “How come those girls have a penis?” Their first haircut was scheduled soon after that!

The second and more salient point that contributed to my pride and satisfaction was being able to raise Jonny and David in a manner aligned with their needs and individuality. I felt empowered and successful making decisions about the boys’ lives, which on many occasions raised eyebrows and created skepticism. My husband and I were confronted innumerable times by people who were absolutely aghast with our efforts to ensure separate experiences for our twins—beginning with our decision not to tell anyone which boy was older until they turned 13, and remaining steadfastly committed to the goal that they would be prepared to attend different colleges. We worked out a developmentally appropriate timeline that would enable the boys to handle themselves without their twin. Although the boys sometimes did not enjoy themselves, we arranged for separate classes, separate sports teams, separate day camps, and separate overnight camps. The consistent message was our persistent focus to help them develop the resilience and capacity to manage on their own.

I don’t want to gloss over the difficult issues that cropped up for them. They faced a number of dilemmas over their very different capacities to socialize. Jonny, being on the quieter side, had difficulty making friends, while other kids would flock to the outgoing and gregarious David. Jonny was certainly aware of this divergence. As young as seven, he voiced his resentment that everyone liked David better. David was invited to many play dates with friends that the boys did not share. It was incredibly painful to listen to Jonny’s sad and resentful feelings about not being included; nonetheless, we honored David’s separate experiences and organized some special times for Jonny. Of course, what Jonny could not appreciate at the time was that my husband and I recognized Jonny’s distinct temperament. Jonny preferred quiet, contemplative time to build intricate and complicated structures with his set of wooden blocks. He enjoyed “getting lost” in a creative endeavor—and still does. He does not need a large group of friends. He is content with one or two close buddies, and David.

David had to contend with a myriad of learning issues diagnosed when he entered kindergarten. So, he was not capable of accomplishing the artistic and musical successes that Jonny achieved. Moreover, David’s growth lagged behind Jonny’s until they turned 18. He was diagnosed with intrauterine growth retardation. He was always labeled the “small twin.” Thankfully no intervention other than time was required. He is blessed with a personality that exudes optimism. He enjoys his work, loves being around people, and excels at finding terrific women to take care of him! Although his learning difficulties continue to present challenges, he has developed effective strategies and coping skills to manage.

These differences did not produce unmanageable competition or discord because the boys had been raised in a family culture where individuality was clearly celebrated and encouraged. The joy and satisfaction I feel watching them interact as adults are beyond expression. Jonny and David are emotionally close, temperamentally opposite, and authentically respectful and loving.

The beauty of reading this wonderful collection of stories in this second anthology of Multiples Illuminated is the sharing of our unique family experiences. When I speak as a “twin expert,” I qualify my remarks by emphasizing that no parenting philosophy should espouse the notion that “one size fits all.” How we choose to raise our children is a composite of our individual life experiences, our values and ethics, and our communities. Learning about varied ideas and approaches is the lens through which we can expand our consciousness and grow. You will thoroughly enjoy reading these terrific essays. You will laugh, cry, and smile, and feel a shared kinship with other parents of multiples navigating their lives together.