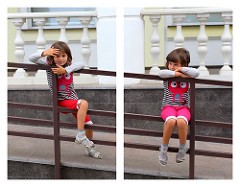 Among the many interesting questions that were asked during my workshop and book presentation in Guatemala, there are a few that I’d like to write about in some detail. A mom of eight-year-old fraternal twin girls seemed puzzled by some behavior exhibited by her daughters. She explained how well each girl functions independently. They are in separate classes and have separate friends. So, when mom suggested that they each do a different afterschool activity, she was surprised by their reluctance to be separated. Apparently the girls discussed the situation by themselves and ultimately decided to stay in gymnastics together. In hopes of shedding some light on the subject, I spoke about how twins work to keep a balance between them—often in an unconscious manner. I related that both girls are staying true to the roles they have carved out. The caretaking twin does not want her twin to be separate from her. Even though her sister may want to be independent, the caretaking twin feels a loyalty and obligation to do as her sister says in order to maintain their connection and minimize conflict. After listening to my explanation of these circumstances, the mother decided that she would make an attempt to insist that her daughters experiment with being in separate afterschool situations to determine if and how this impacts their relationship.

Another mom shared an amusing yet enlightening anecdote about how some teachers do not understand how important it is for twins to have some things that exclusively belong to them in order to help them begin to solidify their identity and separateness. Apparently the teachers at her sons’ preschool advised her to get identical lunch boxes for each of her four-year-old identical twin sons in order to minimize conflict.

She related that it was a disaster from the beginning. The boys were angry and upset because each boy wanted his own lunch box. As soon as she took each one to pick out his own lunch box, the conflict subsided. The story illustrates what many people do not understand about raising twins. Believing that keeping things the same and equal will mitigate conflict is erroneous.  Understanding why twins need to have separate clothes, some separate toys, and certainly separate lunch boxes to help them begin to feel like two separate individuals is vital. Another mother of two-and-a-half-year-old fraternal twin boys talked about how distraught and disappointed she feels with her sons’ preschool experience. In the course of a very short time, the teacher has labeled one boy as good and the other one as a troublemaker.

I do believe that providing teachers at all levels with more insight and knowledge about twin development could mitigate situations like the ones I have described.

“Twins” by Vladimir Pustolvt is licensed under CC BY 2.0