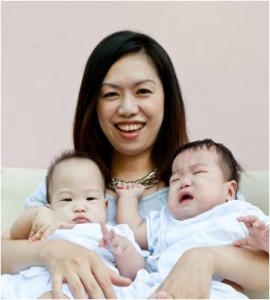 Dr. Nancy Segal published an interesting article in the latest edition of Twin Research and Human Genetics titled “Zygosity Diagnosis: When Physicians and DNA Disagree.” A portion of the article is devoted to a mother’s reaction upon discovering via DNA testing that her two-year-old daughters are monozygotic, not dizygotic, as she had previously believed. I am reprinting a paragraph from the article that quotes this mother’s response to this new information. I find what she says perplexing and incomprehensible.

Instantly, my world turned upside down; this was a case of mistaken   identity. . . .

For so long, I had focused on all of their differences instead of their similarities, although I had longed to see what other people had seen. . . .

To be able, for the first time, to see my girls as others had seen them was like discovering all over again that I was having twins. . . . I felt a sense of relief receiving the news. . . . On the other hand, I was rattled at the thought that my pride and stubbornness in refusing to entertain the possibility that my girls were identical could have resulted in my daughters not fully appreciating who they are—their very identity. I wondered if their bond would have been compromised by my mistaken belief that they [were] fraternal.

Later on in the article, the mother talks about how she worried that as fraternal twins, the girls might compare themselves to each other. However, now that she recognizes their MZ status, she hopes they will take pride in each other’s accomplishments.

What I find so appalling and enigmatic about her thinking is that our parenting goal with twins of either zygosity is to help each child grow into her individual self. Their identicality does not define them; rather, they are defined by their ultimate capacity to feel separate and unique on their own.  I am certainly in favor of DNA testing for multiples as it is important to have this information for medical, developmental, and emotional reasons. However, I find it difficult to understand why this mother’s reaction to the news drastically alters her parenting practices and beliefs. Believing that a zygosity determination seals the fate of your twins can lead to unhealthy outcomes that are shortsighted and detrimental. Some parents feel a bit excluded by the connections formed between identical twins. In these circumstances, it can require enormous energy to solidify the parent-child relationship with each twin while respecting and acknowledging the close bond between the twins.