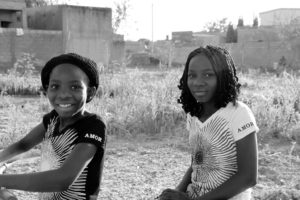 Many parents of twins confront the daunting challenge of helping their children develop individual friendships. This is not usually an issue with boy-girl twins, vut same-sex twin pairs frequently have difficulties in this arena. A mom of ten-year-old identical twin girls recently shared a story with me that illustrates this challenge.

Both girls have been in separate classrooms since kindergarten. One of the girls, Kaye, has more self-confidence than her sister, Clarissa. She is outgoing, independent, and easygoing. She attends sleepovers and embraces new activities and challenges. Clarissa, on the other hand, is tentative about approaching people and experimenting with new experiences. Though she takes a bit longer to get comfortable, she eventually follows her sister’s lead and accomplishes the task at hand.

The other day, the mom and her daughters were walking home from school, and Kaye asked her mom if her friend Connie could sleep over at their house that weekend. Connie was in Kaye’s class and was not a shared friend of both girls. Before their mom had a chance to reply, Clarissa firmly interjected, “No, we can’t do that this weekend” and cited other plans that would render the sleepover an impossibility. Kaye interrupted Clarissa each time she raised an objection and argued that Connie’s presence would not be a problem.

The mom recognized what the real problem was right away. Clarissa did not want Kaye and Connie to spend time together because she felt left out and abandoned. The mother suggested that Kaye find out if she could sleep over at Connie’s house instead. Kaye was thrilled with her mother’s suggestion and grateful to have an alternative plan for her to spend time with her friend.

The mom shared how conflicted she feels in situations like this because she knows that these disputes reflect each daughter’s individual readiness to move ahead. Kaye is eager and prepared to move away from her sister and develop other close relationships. Clarissa, on the other hand, is not ready yet. She still wants to hold on to Kaye for security and comfort. Nonetheless, holding Kaye back because of Clarissa’s neediness would be unjust and detrimental. Their mother recognizes that she must treat the girls as individuals. Clarissa’s apprehension about becoming more independent does not justify holding back Kaye. The mother consoles herself with the knowledge that she cannot make her daughters’ lives fair and equal. Also, she has repeatedly witnessed Kaye’s trailblazing behavior working as a positive model and motivator for Clarissa.

I applaud parents who tackle these difficult issues immediately rather than too late or never. This mom’s emotionally healthy and genuine interest in each girl’s well-being is reflected in her capacity to nurture each one’s individuality—not their dyadic synergy. I am optimistic that these girls will grow into loving, individuated young adults whose choices and life paths won’t devastate each other. The time and effort that their parents have devoted to their singularity and individual needs will protect them from growing up competitive and enmeshed.