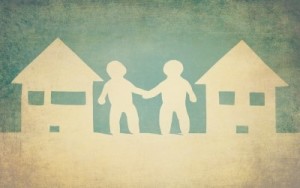 I have written often about how partners of twins have difficulty understanding the depth and pull of twinship. A woman I shall refer to as Mrs. D recently reached out for help to handle her feelings of resentment and helplessness about her husband’s renewed and intensified relationship with his twin brother.

She explained that, in the past, she had a terrific relationship with her brother-in-law. However, since his contentious divorce and his move next door to her family, she has felt left out and abandoned. When she expresses her discontented feelings to her husband about this situation, he becomes angry and cannot figure out why her feelings about his twin brother have changed. Her husband tells her that he has to be very available to his twin because he is feeling vulnerable and lonely. In her view, her husband seems to have little empathy for the fact that she feels abandoned, as well.

I asked her to tell me more about the twin brothers’ upbringing. She explained that the boys essentially raised each other because their father left the home when they were young, and their mother was an alcoholic who worked to support the family. They parented one another, acting as each other’s best friend, supporter, and parental surrogate.

I talked to Mrs. D about their connection—how they held on to each other for emotional and physical survival. In the face of his brother’s dilemma, Mrs. D’s husband feels obligated to take care of his brother to the exclusion of other intimate connections. I related that her husband must be feeling extraordinarily guilty because his brother is in emotional turmoil, while he is not.

After Mrs. D understood the circumstances from an empathic stance, she felt more confident about bringing up the subject with her husband. Her husband responded well to this approach, breaking down and confiding that he was feeling helpless and overwhelmed about not being able to help his brother feel better; moreover, he experienced tremendous guilt because he was not suffering. He explained that he and his brother worked hard to keep balance between them when they were growing up because it felt unbearable for one to have more than the other. His brother’s unstable circumstances have triggered his feelings of responsibility for his brother’s well-being once again and caused discomfort about the inequality that exists between them at present.

Talking about this with his wife helped Mrs. D’s husband recognize that he could not “save” his brother, as he believed he could and should. He followed her advice and helped convince his brother to find a therapist to help him work through his issues. This arrangement helped to empower Mrs. D and her husband so that they could act as supportive allies, not rescuers.