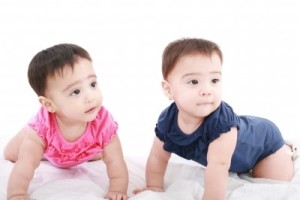 In the last few weeks, countless media outlets have reported on the increase in twin births. The latest CDC 2014 data reveals that 33.9 out of every 1,000 births resulted in twins. While 135,336 twins were born in 2014 compared with 138,961 born in 2007, a record percentage of twin births occurred. This statistic is substantiated by the fact that in 2007 only 32.2 per 1,000 births were twin births that year, reflecting that rates for 2014 were actually higher.

Moreover, media frenzy heightens on January 1 every year in the media’s zeal to report where the first twins of the New Year are born. This year provided a very interesting twist in that a set of twins in San Diego were born a year apart. The news that one twin was born in 2015 and the other in 2016 was a big story that captivated lots of attention.

I believe this increase in twin births has created a backlash that affects how families with twins are treated. Families with twins need two spots in schools, need more space to get around, and unabashedly garner more attention and attraction than they ever bargained for. Many moms of twins feel as if they are under a microscope because of the attention that twins attract. Secret glares, contemptuous stares, and a seemingly open-ended entitlement to ask inappropriately intrusive questions and make unwarranted suggestions about having twins appear to be the nontwin public’s inalienable right.

Recently I wrote an article for Multiplicity Magazine exploring the reasons why some mothers of multiples feel stigmatized and singled out. Countless blog posts about how mothers of twins are mistreated and scorned have drawn much attention and acknowledgment by other twin moms. I write in my article that perhaps the source of nasty comments and scornful innuendos emerges from a number of issues.

I have concluded that more than likely it is envy that predisposes others to devalue mothers of multiples. Or perhaps, in some cases, the media’s obsessive preoccupation with television and movie icons and athletic superstars who are having twins creates a perception that famous, wealthy people simply pay for fertility treatments in order to get twin babies. Some people feel tremendous resentment about these couples’ ability to pay for whatever they want—including multiple births. They displace these feelings onto women who have suffered through the agonies of infertility in order to have children.

Perhaps these circumstances would be mitigated if more people understood how difficult it is managing two same-age children simultaneously. Inflated and preconceived notions about twinship require a more nuanced context so that the nontwin population jealously coveting the illusion of wanting a best friend for life can acquire a more realistic consciousness about raising twins.