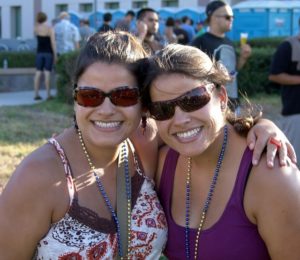 A few weeks ago I spoke about parenting twins to a small staff of speech and language pathologists who treat children at a private clinic. In thinking about their client population, most of the staff had treated only one twin, not both. I marveled that perhaps each twin had a separate experience that afforded her/him a respite from being identified solely as a twin.

One staff member asked me if I felt that parenting awareness about twin challenges has changed over the years. I responded that, while I believe there is ample information available about twins’ developmental needs, the never-ending stereotypic societal beliefs about being or having a twin perpetually seem to override meaningful, practical knowledge.

An example of societal backlash against demystifying the twin mystique may occur when a parent decides to place twins in two different schools. One mother shared this after she made the decision to split up her fraternal twin daughters in the fourth grade:

It was the best thing we could have done for the girls and their “twin” bond. It gave them and us space to see who they were as individuals, and we all learned so much.

It made K. stronger and more social because she couldn’t rely on her sister to bring her friends to socialize with. She had to do it on her own. Needless to say it was a very difficult three months, but she worked hard and overcame her issue. F. felt free from worry for the first time because she didn’t have to think about taking care of her sister.

I have to say I made a lot of enemies by doing that. Parents and some teachers were against the whole idea and weren’t very supportive. They all said they could never do that if they had twins!

One of the staff members asked my opinion about whether or not twins should be separated in school. As most professionals agree, this important decision must be made on a case-by-case basis. I clarified the critical criteria:

I also spoke about my views regarding choices of colleges for twins. I reiterated how important it is that parents be involved in their children’s decision-making processes in order to monitor the tendency for one twin to sacrifice her own autonomy and preference in order to accommodate her twin. Understandably, this leads to tremendous conflict and depression down the line if one’s hopes for an individual experience are dashed again by being known as a twin, not as an individual.

Let’s share our experiences. Have you, your family members, or your friends encountered similar societal backlash?