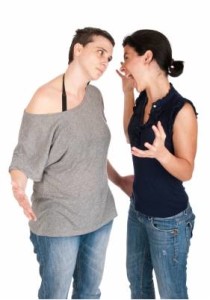 I have been doing conjoint therapy sessions with various pairs of twins and have been intrigued by the dynamic whereby one twin is hyperfocused on needing to be “right.” One twin in particular demonstrates a persistent urge to feel superior. In fact, one young woman became very upset with me when I responded with understanding and validation to her sister’s perception about an incident. She explained how my supporting her sister’s subjectivity implied that I believed she was wrong or bad.

While I thanked her profusely for being able to tell me that my validation of her sister’s perspective had undermined her, I grabbed the opportunity to point out how much her competitiveness interfered with her capacity to appreciate another’s perspective. I attempted to point out how one’s ability to see divergent viewpoints without feeling triggered or threatened is an important component of intimate behavior.

She recounted how being competitive with her twin sister was her main focus and raison d’être growing up. This attitude correlated with the fact that parental love was parceled out in response to academic achievements and recognition. She expressed regret and concern about how the conjoint therapy has exposed her vulnerabilities to her sister; she worries that her “enemy” now knows her weaknesses and this information will diminish her power and status in the relationship.

She is aware that this self-righteousness has caused a tremendous amount of emotional anguish with her twin as well as with coworkers. She recognizes that she is quick to anger and becomes defensive when someone disagrees with her or expresses a difference of opinion.

A gentleman whom I will call C also struggles mightily with this issue, although it manifests in a slightly different context. He grew up in a family where he felt belittled and dismissed. He vied for attention with his twin and older siblings to be recognized as a successful individual in his own right. His narcissistic vulnerability surfaces when he unwittingly or deliberately responds to his twin’s behavior in an extremely pedantic parental tone. Predictably, his twin brother feels annoyed and judged in these situations; consequently, he shuts down, stonewalls, or ignores C. As a result, C erupts with rage and resentment because his brother has triggered these unresolved feelings of not being recognized.

C has worked hard in his treatment to become aware of these tendencies and to consciously redirect his thinking and communication so that their dyadic disruption is minimized. Clearly C’s propensity to behave this way has much to do with the competitive twin dynamics that are still very active in the twinship. Nonetheless, he is working diligently to use his newfound awareness to embrace the notion that authentic self-esteem does not emerge from vanquishing your opponent. He must practice interacting with others in addition to his brother to learn how to feel comfortable being himself rather than feeling as if he has to be better. Inherent well-being evolves from a strong desire to recognize competition rather than feeling compelled to act it out.

How have you managed the need to be right in your twinship? Share your story in the comment section.

Image courtesy of artur84 at FreeDigitalPhotos.net