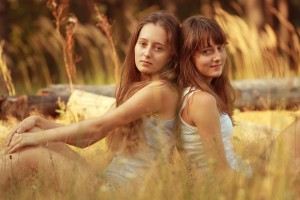 A friend of mine shared a story about her seven-year-old twin girls that highlights how important it is to enlighten people who work with twins about appropriate management of the twin connection.

In the meantime, her other daughter, who loves acting and has minimal interest in gymnastics, was awarded the starring role in a play at the girls’ school.  My friend noted that the twin with a lesser role in the musical has been very supportive and happy about her sister’s accomplishment.  Simultaneously, Mom has noticed that her gymnastic daughter has been acting out a bit at home, which she feels is related to her sister’s new stardom.

Mom talked about an ongoing challenge in managing her own feelings: being happy for the twin who is pleased and excited while handling the other twin’s reactions and feelings. We talked about the importance of articulating for her gymnastic daughter how normal it is to have two feelings at the same time for someone you love.  She is happy for her sister and jealous at the same time.

How lucky these twins are to have a mother who is so insightful about the importance of striking an emotional balance between her daughters. Mom has decided to call the gymnastics teacher and let him know that holding back one of her daughters so that he doesn’t make her sister feel bad is both detrimental and unfair.

I can’t stress enough the importance of being up front with your twins about their successes and challenges so that neither has to feel bad or guilty about being jealous of the other.  Parents can certainly expect sibling rivalry between singletons and even more so between twins.

Many adult twins I have treated say they resent their parents’ inability to authentically celebrate their successes because the parents didn’t want to hurt the feelings of the twin who struggled. Feeling guilty interferes with the ability to make sound parenting decisions.  In some cases it may lead to raising a young adult who feels entitled, victimized, and irresponsible because her parents felt conflicted about the disparity between their two children.  Feeling connected to each twin as an individual helps enormously to develop the capability to celebrate each twin’s singularity without undue comparison or remorse.