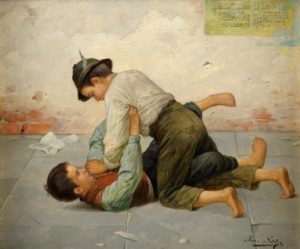 I recently had the pleasure of speaking to a diverse group of people interested in twin psychology—parents and grandparents of twins, children of adult twins, and twins themselves. I was especially intrigued by a situation shared by a mother of eight-year-old fraternal twin boys. She explained that she consulted a myriad of psychotherapists and behavioral specialists to seek help with her sons’ constant fighting and power struggles. She stated that she was very uncomfortable with conflict and had little success curbing the boys’ aggression toward her and toward each other. They were not motivated by rewards for good behavior or negative consequences for misdeeds. Instead, they experienced tremendous gratification from ganging up on their mother and fighting with each other.

This mother’s difficulties were similar to a dynamic highlighted in Dorothy Burlingham’s article “Twin—as a Gang in Miniature.”[i] Burlingham discussed two pairs of identical twins who developed a shared mindset that put them in opposition to everyone else and behaved as a gang of two.

In response to my discussion about the benefits of spending time alone with each twin to facilitate the parent child connection, the mother related that she came late to this realization. She began instituting alone time when her boys were five years old; however, they consistently fought her attempts to separate them. She was at her wit’s end and feeling as if she was waging a losing battle against her sons’ dyadic power.

A mother of five-year-old identical twin girls reached out to me for help with a similar dynamic. One of the girls decided that she would no longer poop in the toilet—only in a diaper. Both she and her sister previously used the toilet without any problem. However, when one twin resolutely refused to do so, her sister followed suit. Their mother decided to do nothing about this joint decision because she was uncomfortable taking control over their toileting habits. Contrary to the mother’s decision, I advised her to intervene sooner rather than later because she was unwittingly setting a precedent that eroded her parental authority. She eventually followed my advice and successfully ended her twins’ manipulative behavior.

I explained to the mother of the eight-year-old twin boys the importance of exercising control rather than surrendering to the children’s will. Defying parental control and authority becomes a bigger issue as children develop. Exercising discipline and guidance at all stages of development is vital to our children’s well-being. We potty train children because using the toilet is a societal norm. An important parental task is helping our children conform to societal benchmarks. Since the psychological stakes increase with age, the need for containment and restrictions persist throughout childhood. The end result is that children feel more secure, safe, and emotionally resilient when boundaries are consistent and predictable.

Image is in the public domain co