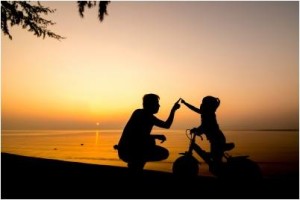 Parents of twins face a challenging dilemma in attempting to establish equitability between twins who have strikingly different temperaments, needs, and personalities. At times, the twin who appears more laid-back, self-contained, and independent begins to resent his twin sibling who actively and aggressively demands considerable time and attention. Unhappy about the competitiveness with his twin, the “quieter” one devises methods to get recognition and validation. This child might experiment by exhibiting obstinate, stubborn, or controlling behavior. He may become a finicky eater, recognizing that the ongoing battle he wages with his caretakers is mighty successful in terms of attention and time devoted exclusively to his needs. Later, recognizing that his parents feel upset and worried about his reluctance to eat only certain foods, he may adopt other behaviors that elicit this same concern and parental powerlessness.

What begins as a twin trying to get what she needs in response to an overbearing twin sibling can eventually turn her into feeling and acting victimized along with being perceived and treated as such. She knows that when she seems sad and withdrawn her parents will work overtime to try to make her happy. In some unrecognizable and unconscious way, this child makes people close to her feel sorry for her; in a sense, she is enabled to feel like a victim rather than empowered to learn how to get what she needs from family members in a manner that is positive and growth enhancing.

When parents feel sorry for a child and cannot find appropriate strategies to promote change, a system develops whereby a child can feel adversely affected rather than being helped to learn how to be responsible for doing what he needs to do or asking for what he wants.

Parents need to recognize this dynamic and try alternate methods of helping this child feel praised and validated in authentic ways. Parents must be vigilant about not putting twins in a situation whereby one will be automatically triumphant and the other one will struggle. For example, if you have a very athletic twin, don’t teach both of them how to ride a bicycle at the same time. Otherwise, their individual successes will be lost in a competitive drama. Twins learn how to savor their individual successes in the face of their twin’s accomplishments when their respective experiences can be recognized and celebrated by their family and eventually by one another.