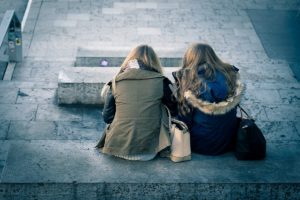 I met a former patient of mine one day for coffee. We had not seen one another since she graduated from college. Like many college graduates, Shelley, who is a twin, is looking for a job and feeling quite frustrated. She is fortunate to be able to live with her family while she is job hunting and making some money by waiting tables. The issues that Shelley and I worked on about three years ago are no longer bothering her. It was so impressive and gratifying to see how much she had matured and changed since we first met.

Much of our therapeutic work focused on issues within the twinship that Shelley never understood, articulated, or put in a particular context. She and her twin sister attended the same college and lived together much of the four years. Attending separate colleges was never discussed openly, although both girls had contemplated it. In the end, it was not really dealt with, as I surmise that both felt they needed each other to make the adjustment.

As happens with many twin pairs who attend the same college, the fantasy or belief that the largess of the new experience will afford each of them a separate existence did not materialize. For obvious reasons, they were unable to escape the twin-like identity that has defined them. Shelley returned home after the first year of college filled with rage, frustration, and irritability. We worked on helping her understand her role in the family, her difficulties within the twinship, and her personal struggles. During the next few summers, we continued to solidify her separate and unique self.

Because Shelley now feels comfortable and separate, she has developed tremendous empathy for her sister’s struggles. Initially, the twin problems made her feel bad, insecure, and angry. Having developed the psychic space to be herself, she is able to be a patient, loving, mature adult and not a nasty, hostile competitor. Shelley’s progress has changed the twin dynamic so much that both women can now experience typical sibling emotions—love, hate, compassion, care, and empathy—which was their ultimate goal.

Photo in the public domain courtesy of Foundry.