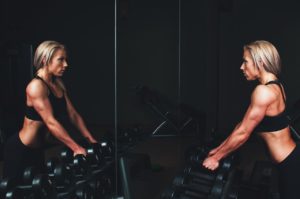 While twins can be excellent motivators for each other, sometimes risks are associated with the constant comparison and competition that underlie their attachment. This article discusses how these dynamics can contribute to eating disorders in some identical twin pairs. It was originally published on FoxNews.com on August 28, 2016, and I am sharing it here with the author’s permission.

Growing up, identical twins Jennifer* and Marie*, 34, were best friends and inseparable. They had their own secret language, played all of the same sports and had a normal, happy childhood.

“We had a house with a white picket fence. My parents were together [and] they didn’t fight. We went on vacations. Everything was perfect,” Marie, who now lives in Harrisburg, Pennsylvania, recalled.

But all that changed when the twins went to high school.

Since they ran within a tenth of a second of each other on the track team, their coach pinned them against each other and it made them think that one of them had to be better than the other.

When they realized they were going to start applying to colleges and they would be away from each other for the first time in their lives, their competitiveness intensified.

Although they had never paid much attention when other people would try to tell them apart by labeling one as prettier, smarter or a better athlete, they started to question those things themselves.

“That led to ‘Who can get skinnier? Who can eat less?’ It became a control thing,” Jennifer, who now lives in La Grange, Illinois, said.

The twins restricted what they ate to 300 calories a day, fit in extra bouts of exercise whenever they could and constantly took stock of what the other one was doing and tried to one up each other. At their lowest, they each weighed 85 pounds.

When their parents realized what was happening, the twins started a treatment program. Although Marie continued to do well throughout college, Jennifer relapsed twice and had to be hospitalized.

Today, both twins say they’re each in a good place. Marie is married and has two children but said her bones are weak. The consequences of the anorexia for Jennifer, however, have been more severe: osteoporosis, anxiety and no detectable estrogen or sex drive.

“Even if I got a husband right now, I’m pretty sure I wouldn’t be able to have a baby,” she said. Nevertheless, she no longer obsesses about food and exercise. “I’m much happier than I was.”

Ten million people in the United States suffer from eating disorders. Although it is not clear how common eating disorders are among twins and multiples, they are 33 percent more likely to be diagnosed with anorexia later on in life compared to the general population, a study out of Sweden found.

Since eating disorders have a biological and genetic predisposition, it would make sense that twins who share genes are more likely to have an eating disorder than if they were only siblings.

Among fraternal twins, if one twin has anorexia, there is an 11 percent chance the other twin will develop an eating disorder too, according to a study in the journal Directions of Psychiatry.

Although it’s not clear why, there are theories that might explain the increased risk for twins.

Among identical twins in particular, they have a constant mirror of someone who looks just like them.

“In some ways, because of some of the identity issues that can play out in eating disorders, you can use that as a comparison in a way to differentiate yourself,” Siegfried said.

What’s more, if both twins have an eating disorder, the severity can increase because they are constantly comparing each other and competitive about who can lose the most weight.

“In a ‘twinship’ you have a special set of challenges that you don’t necessarily have as an only [child],” said Dana Harron, a clinical psychologist in Washington, D.C. Since twins are raised in the same environment, have similar school pressures, and develop at the same time, they’re more likely to compare themselves, not to mention that others will label them as “the pretty one” or “the smart one.”

Attachment difficulties in early childhood are believed to play a role too. There can be a mismatch between how babies need their emotions regulated and how the parents are able to regulate those emotions.

“We look at parents as part of the solution, not the cause,” she said.

Stress in the home may also be a contributing factor since parents with multiples can experience more stress than parents with singletons.

What parents should know

Experts say parents who have concerns about their children should look for changes in their behaviors around food, including food hoarding, stealing food, or lying about food as well as an increase or decrease in weight. They should also look for signs of isolation and perfectionism in school, on the field, at work and at home.

When seeking treatment, look for an eating disorders specialist and preferably one who works on a team that includes a physician and a registered dietician. Experts say that although individual treatment is ideal, family therapy is also important.

A family therapist can help families work through the dynamics that tend to be revealed only when twins are together. Plus, the same aspects of their relationship that play a role in the eating disorder can also help them recover.

“Twins can bring out the worst in each other and also the most beautiful strengths,” Harron said.

*Names have been changed.

The image in this post is in the public domain courtesy of Scott Webb.