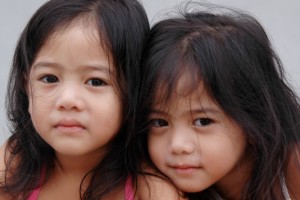 Two lovely twenty-two-year-old identical twin girls (whom I will refer to as J and G) found me via my website. They are seniors in college, both pursuing the same degree. J told me that she and her sister have been fighting constantly. They are both unhappy living with each other. They have lived together for most of their college years.  Both began freshmen year living with different roommates; however, by the second semester of sophomore year, the girls moved in together because the twins’ respective roommates wanted to live together.  J explained that she and her sister dressed alike until they were ten years old. She told me that she was the twin who always dressed in pink. Her sister G wore whatever other color clothing they were given. When they began college, G finally had her turn to “own” the color pink. She did so by buying pink curtains for her room!

This story is complicated by another dynamic that has impacted their struggles to understand why they are having so many difficulties getting along. Throughout their lives, their mother has insisted on absolute togetherness and fairness. She becomes worried if one of them goes to the store without the other. The girls were looking forward to separate summer internships in different cities. However, their mother’s anxiety and disapproval of the separation have negatively impacted the girls’ excitement about this new chapter in their lives.

Both girls are aware that their fights have everything to do with their own desires and fears about separating from each other. If one decides to go shopping by herself and cook her own meals, the other twin will bake a dessert and refuse to share it with her sister because she is angry that her sister excluded her from her meals. We talked about these feelings being a metaphor for the struggles over separation that they are experiencing. Both teeter between wanting to separate, being angry that the other is excluding her by separating, and yet feeling guilty that one is excluding the other.

Although they have tried to differentiate themselves, many people cannot tell them apart. Teachers are always asking them who has better grades and even giving papers to one that belong to her sister. Both are at the top of their class scholastically. Neither has had another intimate relationship. They have seen a few different therapists who have not been able to help them understand the genesis of their fighting and annoyance with each other. Both are a bit frightened to be on their own but excited to confront the challenge.

G told me that she was so angry with her sister during the Christmas holidays that she bought a copy of my book The Same but Different to give to her; J presented her sister with a sweatshirt that said “Twins Forever.”

Hopefully they will be friends forever and will be able to work through the resentment and animosity they feel toward one another at this moment. Indeed, being compared and indoctrinated with the notion that everything between twins must be fair, these young women have issues to work through to discover and enjoy their individuality and uniqueness.