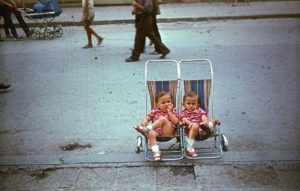 A few weeks ago, I acted as a cofacilitator for a small group of women with young twins. Most of the issues that the moms discussed are familiar and expectable challenges associated with raising multiples. One mom with ten-month-old twins talked about difficulties related to feeding and sleeping. She shared her story about a traumatic three-year battle with infertility that contributed to her unmitigated anxiety and feelings of helplessness during her pregnancy and after the children’s birth. Her boy/girl twins stayed in the NICU for four weeks due to premature birth complications, and she recalled how worried she was about her children’s weight gain. Reflecting back on those early months, she felt grateful and relieved that her children are now thriving and developing.

A mom with ten-month-old identical twin boys was also pleased with her children’s progress. She had suffered from severe symptoms of PPD (postpartum depression) after the birth of her boys. Since she had a two-year-old when her twins were born, she was not in the least prepared to find herself lost in depression and paralysis. The unimaginable demands and burdens associated with caring for two babies at a time overwhelmed her.

Though she has recovered and her twins are thriving, she lamented that her three-year-old son has to fend for himself much of the time when she is out with all three of them by herself. When she takes all of them to the park, she has to watch her son from afar while caring for the twins. She says that her son does a wonderful job integrating with other children and playing comfortably. Both the other facilitator and I mentioned how terrific it is that he is developing the capacity to manage himself in these circumstances. Instead of looking upon this scenario with regret, we talked about how these experiences will contribute to his emotional growth. She does try her best to spend some time alone with her older boy whenever she can because she understands how much the twins have impinged on her relationship with him.

Another mother in the group expressed sadness that her twin daughter appears more attached to the twins’ maternal grandmother than to her. While she expressed tremendous gratitude that her mom moved close-by to help her with her boy/girl twins, she feels guilty. Her son needed her so much in the early months that her daughter’s care fell to their grandmother. The other facilitator rightfully pointed out that raising multiples necessitates relying on other caretakers. Attempting to balance outside help with conflicting attachment loyalties is an ongoing struggle for many parents of multiples.

Another mom talked about her reluctance to set boundaries for her pair of boy/girl twins. She described how her three-year-olds are out of control: they are unable to listen, their play together is destructive and combative, and they cannot find ways to stay soothed and engaged at kid-friendly restaurants. Her attempts to organize some time alone with each child are thwarted by her son’s long-winded screams and protests. She managed some time alone with her daughter, attending a friend’s daughter’s birthday party, but then lied to her son about where they had been. She was frightened of his potential reaction to the truth. While she recognizes that she has difficulty setting limits, she will have to explore the underlying reasons for her reluctance in individual therapy.

Having twins, especially as a first-time mom, is just plain difficult. Navigating the twins’ needs, adjusting to maternal responsibilities, and living up to societal demands and expectations are overwhelming tasks. I suggested to the mothers in the group that they try to appreciate the bigger picture, which is challenging when feeling lost in the moment. A sense of humor, patience, and self-love are vital ingredients in the process of raising twins.

Do you have advice for or questions about being a new parent of multiples? Let me know in the comments.