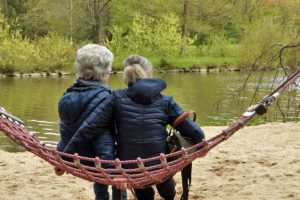 Often I post stories about twins celebrating milestone birthdays together. However, I rarely tell stories about adult twins who have reconnected in later life after some years of discord.

An identical twin woman in her midseventies—whom I will call Mary—came to see me after a particularly traumatic interaction with her twin sister, Monica.

These women live near one another—about a thirty-minute drive. They had a long history of getting together for family events but rarely saw one another by themselves.

Mary came to see me because she was distraught about her last interaction with Monica. She shared that she had struggled for many years with her twinship because her husband and her twin did not get on very well. Over the years there had been one incident after another, exacerbating the ongoing conflict between her spouse and Monica. As a result, albeit not a healthy resolution, Mary had basically erased herself from planning family events because she could not tolerate how her husband and sister consistently criticized each other. She developed an attitude of passive resistance and resignation when it came to deciding whether or not to include Monica in family gatherings.

One morning, Monica called Mary and asked to see her. Mary could tell from Monica’s tone that she was upset but had no idea what might be the matter. They met at a coffee shop the next day, and Mary was shocked, ashamed, and saddened to listen to her sister’s litany of hurt feelings and angry recriminations. Monica castigated Mary for being selfish, passive, and dismissive. Through her tears and rage, she told Mary how upset she was about not being included in the last family gathering. Monica made it clear that she could no longer be engaged with the family if she was going to be excluded and mistreated—she felt like a pariah or an afterthought.

Listening intently to Monica’s threatening rage, Mary felt stunned and incredulous. It was as if she had awakened from a stupor whereby she had become oblivious to her sister’s feelings, presence, or concerns. After listening to Monica’s complaints and hurt feelings, Mary burst into tears. She felt terrible about contributing to Monica’s grief by remaining unengaged and separate. She acknowledged to me that she felt tremendous guilt and self-loathing that her behavior had developed into a dissociated self-state that turned a deaf ear and a blind eye to Monica’s sentiments.

Fortunately, as often happens after an emotional rupture, there is the possibility of repair if both individuals can truly listen to each other’s subjective reality and truth without becoming defensive or resentful. Since their traumatic interaction, I am delighted to report that Monica and Mary have worked toward building a much closer and safer connection. Mary stays attentive to family plans and ensures that Monica is included. Most importantly, their twin connection has changed dramatically. Both women really enjoy spending time together, sharing family news, and helping one another out when the need arises.

For the first time in many years, the sisters look forward to their time together and enjoy one another’s company and companionship. Both recognize and appreciate their connection and will go the extra mile to nurture it. Mary is grateful about how much she has grown emotionally as a result of this very valuable life lesson.

Photo in the public domain courtesy of silviarita.