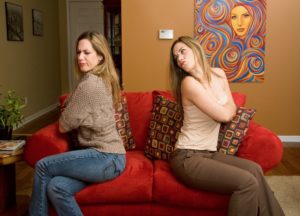 A mother recently called me to ask if I could help her adult identical twin daughters learn how to communicate with one another. Both women, who are in their thirties and have lived together in their family home since nineteen years of age, have endured a myriad of destructive, quixotic relationships that ended in turmoil and despair. In most cases, the sisters blame one another for the relationship’s demise. Each accuses the other of driving their respective boyfriends away by being critical, aggressive, and threatening—supposedly with the aim of undermining the other’s happiness.

Both women have a triangulated relationship with their mother. Each calls the mother separately to complain about the other. The situation has deteriorated dangerously in the past few months, hence the mother’s desperate efforts to find someone who can help the sisters resolve their differences.

Sadly, neither young woman seems willing to seek help. The mother is adamant that neither twin will consider moving out of the shared house to live separately. So, without even entertaining the option of separate living spaces, the sisters continue to hold each other accountable for the current state of affairs. Sadly, I have seen this dynamic many times before. The situation is complicated and tragic and often intractable.

The sisters’ circumstances have become the norm. Feeling angry and victimized within their dyadic morass is much like an addiction. The bickering and blame have become a way of life—perhaps less risky than moving toward independence. Neither twin takes responsibility for how much their dyadic interplay creates this perpetual drama. They appear incapable of discovering or understanding what a healthier connection might feel like.

Both women are highly educated. They have master’s degrees and well-salaried jobs in unrelated fields. Nevertheless, both are lost in this unhealthy, repetitive cycle of blame and aggression. One of the participants must decide to abandon the other, as often needs to happen in abusive relationships. I wonder if and when these enmeshed twins will find the courage and strength to end their destructive entanglement.

Image courtesy of thephotographymuse (CC BY 2.0