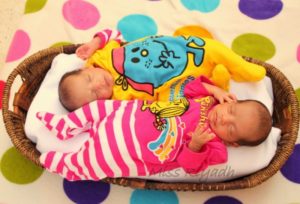 Having grown up in the nondigital era, I am still coming to terms with living in a world where no one wants or values privacy.

The video clip of the reunion of the ten-year-old Chinese twins separated at birth that recently aired on the Today show seemed like an exploitative invasion of and impingement on a life-altering experience that should have been privately celebrated by these vulnerable young girls. While I do understand the excitement of unexpectedly discovering the twins’ connection, I cannot condone these adoptive families’ decision to record the moment of their meeting for public viewing.

In the fifties and sixties there was a television series called This Is Your Life. The guests on the show each week would be surprised by people from their past whom they had not seen for many years. I remember it was heartwarming and exciting to witness their delight and pleasure about reconnecting with a long-lost acquaintance or relative. However, dressing these twins in identical pink t-shirts and filming their emotional outbursts in real time seems unconscionable.

While identical twin women Emily and Haley Ferguson are finalizing plans for their spinoff reality show following their appearances on The Bachelor, hopefully Audrey and Gracie will be developing a real-life attachment away from the limelight and outside of the ever-present, voyeuristic public eye.