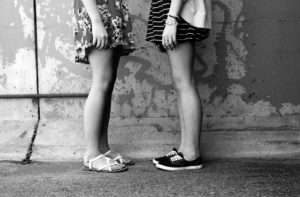 For most children in our Western societies, the goal of adolescence is to become more independent from their parents. In his terrific book on adolescent development, Dr. Anthony Wolf writes that adolescence is not a single event but a number of changes happening within a relatively short period. The two main forces of adolescence are the onset of sexuality and the turning away from parents. Young teens turn away from their childish feelings. They cannot feel close to or dependent upon their parents. Home is a natural realm for them to express dependent and babyish ways of functioning. They only see what is day-to-day and have no long-term perspectives. They become immature, lazy, irresponsible, dishonest, and demanding.

Dr. Wolf writes that boys generally close their doors for four years and experience perfect passive pleasure and terminal lethargy. Girls spend the majority of their adolescent years yelling, lying, and sneaking around. Girls mask their struggles to separate by fighting with their parents, thereby keeping the attachment alive ostensibly on their own terms. Dr. Wolf recognizes that the irony of this developmental timeline is that parents are asked to let go when the stakes go up.

Some multiples do not experience an average, expected adolescence described by Dr. Wolf, because, having enjoyed a lifelong dependency on one another, they have already emotionally moved away from their parents. In many cases, this delayed separation will surface later, in response to pivotal life events such as getting married or choosing a job. Perhaps their connection to one another shields them from experiencing a raucous or shaky separation from their parents during adolescence; however, their individual development is delayed in the face of inadequate individuation from their same-age sibling.

I asked my fraternal twin son J, who is now in his early twenties, what he recalled about being a twin in his teenage years. He can retrospectively articulate what some of the difficulties were that he was not quite conscious of back then.

He mentioned how compromising it felt to have “our friends” instead of his own friends. He remembered how being compared to his twin in competitive athletic endeavors was a strain at times. There are so many possibilities for how multiples’ relationships will fare during this developmental phase—a relationship may transition seamlessly or it may be fraught with expectable issues of conflict and dissension owing to the need to feel autonomous and independent.

In my work with families throughout the years, I have been privy to many stories about how multiples negotiate this stage: a teenage girl dyes her hair a wild color to make a statement about her individuality; fourteen-year-old identical twin boys have no friends because they prefer to be with each other; a fraternal twin argues with his twin sister because he does not want her to date his friend; a teenage boy is distraught and despondent because no one cares enough to distinguish him from his twin brother; a twin girl purposefully takes a backseat so that her sister can shine, believing her sacrifice will ensure an unbreakable bond—a distortion that implodes when her sister becomes involved with a serious boyfriend.

Parents of multiples face the tremendous burden of managing two or more unpleasant, mouthy teens. It’s a daunting task to not compare them to one another. For example, if one daughter is lying and the other one is not, it’s vital to make sure you are clear about who is doing what. Finding out that one twin is tattling on the other or lying to protect the other also presents difficulties. It is imperative to maintain a sense of humor, to avoid personalizing their attacks on your character, and to remind yourself how much you love your children despite their temporary diabolical transformation.

In spite of these discouraging behaviors, most teens will emerge again as loving, honest individuals.  I’d love to hear what you think about his subject. Let me know in the comments section.