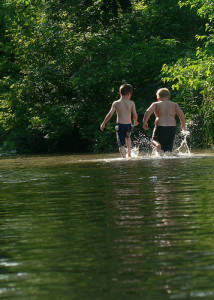 Most parents are captivated by their twins’ connection to each other.

In fact, this twin bond often helps to compensate for the many difficulties and challenges that parents face when raising twins—the constant fighting, the ongoing competition for time and attention, the never-ending complaints about who has what. The wonderful aspects of the twin bond can be seen often while watching twins play. Seeing the creative and imaginative content that emerges out of their twin synchrony can be impressive and seductive. The level of comfort, understanding, and ease with which they move seamlessly can be inspiring to witness and can make parents want to nurture that connection.

Some twin pairs who spend lots of time together with little opportunity to be with other children might find it challenging at first to make friends with other children. They become accustomed to the nonverbal ease of their twin connection. They have not had to develop patience or tolerance for other children’s styles of participation or cooperation. From an outsider’s perspective, it may seem cruel or insensitive to hint at the possibility that the twin bond can at times be crippling or stifling. The twins may protest that they not be interfered with because they have become accustomed to being together without interference or intrusion. They are happily engaged in their twin-shared world until some conflict emerges. Astonishingly, as quickly as the conflict erupts, the reconciliation has happened.

A mother of kindergarten-aged identical twin girls was lamenting the fact that her girls were slow to make friends with their classmates. Although both are in different classes, they appear less motivated to branch out. She has noticed that when they do have separate play dates they are more engaged with the playmate’s toys than with the other child. Her twins seem detached and disinterested unless they are involved in some creative play with each other.

Research bears out that identical twin girls develop the strongest attachments. So, the path toward separateness needs to be slow and steady. I reminded this mom that each child develops her social skills in her own time.

Moreover, it makes absolute sense that at this age her girls are happiest playing with one another. They enjoy a synchrony and sophistication that cannot be duplicated as yet with a same-age peer. By putting each daughter in her own class, this mom has made the decision to help her twins gradually separate from each other without creating overwhelming resentment and fear. As they mature, both girls will be more comfortable moving away from each other but also will have the sanctuary of their attachment to return to when they want it or need it.

One daughter has made a friend in her class, while the other is still a bit hesitant to reach out. When the more tentative daughter found out that her twin’s friend would not be in school that day, she remarked to her mom that her sister might have a hard day because of her friend being absent. Her mom noticed that the statement was made with a combined mix of empathy and scorn—a remarkably healthy dose of ambivalence. This mom understands that the twin bond is vital and nurturing; nonetheless, she also realizes that overidealizing the relationship is damaging for both girls’ burgeoning separateness. When other parents ask her why she has separated the girls, she attempts to explain their being together too much is not always wonderful—especially in the long run

Have you found ways to encourage your twins to explore new relationships or to embrace their separateness? Please share your experiences.