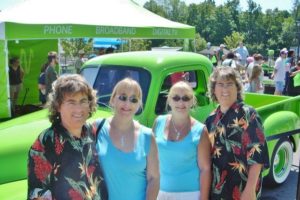 Every day I open my Google Alerts to read the latest news stories that relate to twins. The usual fare includes movie stars giving birth to twins; stories about conjoined twins; tragic circumstances surrounding the birth and death of twin pairs; and, during baseball season, a plethora of stories about the Minnesota Twins baseball team.

When I read through the offerings the other day, I was delighted to discover a fantastic piece written by identical twin men who made their maiden pilgrimage to Twinsburg and attended the Twins Day Festival last August. I so enjoyed their descriptions of the festival’s ambiance, their observations about the participants’ motivations, and their personal experiences and reflections about being in a physical setting where not being a twin makes one an outsider. They write, “To the uninitiated, it feels undeniably freakshow-ish, and also bizarrely post-everything: the only label here is twin.”

Joe and Sam Eichner’s piece, “My Brother and Me at the World’s Largest Gathering of Twins: The Narrative of Identicalness at Twin Days,” is beautifully written, humorous, and engaging. I went to the Twins Day Festival a few years ago as a researcher—without my twin sister. I so related to many of the sensations that the authors describe. With the authors’ permission, I am quoting certain parts that caught my attention—these young men in their twenties have some valuable insights to share with others interested in understanding twin relationships.

Sam and Joe write about their initial reactions seeing the countless twin pairs dressed exactly alike at the festival:

Those of you (Mom; and moms, in general) who assume that dressing up in the same clothes is somehow a natural thing to do, or that it feels at all right — well, you’re wrong. Dressing up in the same clothes — playing up one’s identicalness — accomplishes the opposite. Which is to say: It makes you feel like you’re someone else entirely. Or, more precisely, like no one at all. When you look in the mirror and see someone else exactly like you, and you also know that that person has the same DNA, it’s such that you really can’t even stand to look at the other one; for a moment it’s like you’re literally canceling each other out of the world. A part of you wants to disappear, is disappearing, as the pre-existing conception of your individual self departs from a reality that’s much more intent on grouping you together than allowing you to remain apart.

They describe the sensation of being connected to this group twin experience:

Only around other sets of twins do we feel free to indulge in the narrative of twin-dom that so many have expected from us. In years prior, this might have bruised our precious notions of individuality.  . . .[F]or one weekend each year, packed exclusively with twins, it’s this beautiful thing made more beautiful by virtue of not being watched.

They draw a number of insightful conclusions about their time together and their “twinness”:

A contrarian truth prevails in Twinsburg, wherein the age-old American mantra encouraging you to Be Yourself becomes subservient to the culturally-reinforced mantra re: twins encouraging you to Be The Same. Oddly enough, to really celebrate the uniqueness of being a twin, you must embrace the aspects of your actual individual self that are in fact the least unique.

. . .There’s no need to get sentimental, or remark on how this may be the longest amount of time we’ve spent together just us. We don’t have to talk at all, actually, as is often the case when we’re by ourselves, when almost anything we can say can just as easily go unsaid.

They offer some poignant remarks about twin identity. Joe writes, “[B]y virtue of having an identical twin, I would never be able to be my own wholly unique person. And there’s a particular loneliness in that, too.” Sam writes, “[B]y being one half of, I am less than whole.”

I am grateful to both authors for their willingness to share their reflections. I urge you to read the complete article.