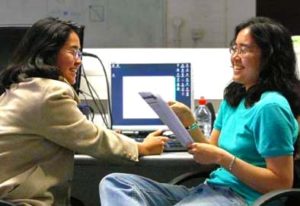 Recently I have been thinking about the issue of twins and compromise because the subject has come up in a few of my patient sessions. Certainly I have learned about my own compromising behaviors as a twin and as an adult in my personal therapy. I recognized that my overriding inclination to compromise too quickly was rooted in my twinship, as well as in the dynamics of my family of origin.

Growing up, my twin sister and I attempted to grapple with insoluble situations via physical fights and verbal insults. As we got older, we contained our physical aggression and developed an unspoken truce about disagreements and conflicts. I do not mean to imply that the nonverbal interchanges reflected resolution or peaceful negotiations. Rather, we had no effective or age-appropriate skills to talk through differences or resolve controversy. We comfortably swept most issues “under the rug,” so to speak, because we did not feel safe enough to say what we felt, needed, or wanted. This “insincere intimacy” that we developed is a common phenomenon in many twin attachments.

Twins can collaborate in a co-created and collusive thought process giving rise to massive denial about deep-seated emotional concerns in order to safeguard the twins’ commitment to togetherness and closeness. Unfortunately, since this tenuous psychological structure becomes more prone to emotional threats as twins mature, this false intimacy may encounter difficulties tolerating ongoing struggles concerning identicality and sameness.

I will use a suspension bridge as a metaphor. Our psyche manages all sorts of feelings and self-states until they become intolerable. Just as a suspension bridge will collapse rather than sway if it becomes overloaded, so our minds can become overwhelmed with too many incompatible sentiments.

To give an extreme example of intolerable conflicts, twins who suffer with anorexia are enacting a life-threatening scenario in which the winner might actually die. Less destructive but nonetheless life-altering consequences involving an inability to work through emotional mistrust or discord can occur in these expectable twin-centric situations: one twin decides not to get involved in a relationship out of fear of hurting her twin; a young man may not be able to tell his twin sibling that he wants to attend a different high school or college so that he can be on his own and not feel handicapped by the twin identity; a young woman may deliberately sabotage her own happiness so that her twin can always be first and be fulfilled. Unfortunately, twins can get into these uncompromising and self-sabotaging perspectives without any conscious awareness about what they are doing or why.

When some chink in the twin armor occurs, a space opens up for ambivalence to surface. While it is painfully difficult in the beginning to discover the shortcomings and disappointments in the twin attachment, the therapeutic work eventually unleashes access to free will that enables a twin to experience attachments that do not require a giving of oneself. Compromise recognizes that two separate individuals are actively working through differences and conflicts to develop a harmonious and healthy intimate dynamic.

What is your experience with developing or encouraging healthy individuation between twins?