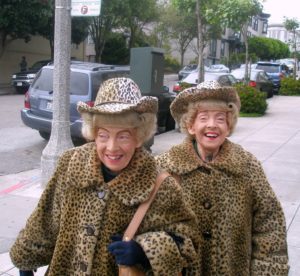 I know a number of twin pairs who found solace and companionship with each other in their later lives in spite of uncomfortable emotional struggles with one another throughout their marriages and parenting years. I reflected on this after interviewing a woman who described how she and her twin sister have grown closer as they approach their sixties.

This woman remarked that she previously had a problematic relationship with her twin because her husband and sister did not get along. Naturally, many couples endure challenging familial relationships. Most of us encounter occasional difficulties in attempting to balance different relationships while keeping our equanimity. However, I believe that twins experience an exceptionally difficult time managing their relationships when significant others impinge upon and interfere with the unbreakable twin bond.

Familial competitive clashes and personality conflicts often diminish as people age, due to one’s acknowledged sense of mortality. Because of this new developmental recognition, some twins reconnect. They no longer fear that their bond will threaten their other primary connections. For example, the woman I interviewed explained that she now feels much more at ease spending time with her sister because she no longer worries about her husband’s disapproval or criticism of her twin. She realizes that he is entitled to his beliefs and feelings and that her marital relationship is not endangered by her husband’s thoughts. After years of marital tensions, both she and her husband have mellowed. Neither feels the need to engage in a confrontation about whether the husband or the twin is more important or special.

Do twins have a harder time hearing about the accomplishments of their nieces or nephews? Do they re-experience the same competitive or comparative feelings they felt toward their twin? Do they feel guilty about having more, doing more, or being more?

I remember interviewing a pair of adult twin women who had significantly different lifestyles. One was a married stay-at-home mom, and the other was a divorced mother of two, who worked full time as the sole support of her family. Did the latter envy her sister’s fabulous trips, beautifully remodeled home, expensive clothes, and lack of financial worries? Yes, she certainly did. Did the other twin admire and envy what her sister had been able to accomplish on her own—raising two amazing children and attaining success in her professional life? Of course.

The sisters’ contentious relationship transformed into a beautiful, sharing connection after their children left home and married. The sisters started to travel together. Even though the financially well-off sister paid for the vacations, there was no animosity or resentment since both of them enjoyed their time together so much. Being together was far more valuable and important than who was paying for what.

The twins successfully co-created an authentic reciprocity. Earlier life stresses changed into just plain life, and both twins were happier for it. Being there for one another as they had been in their earlier years felt gratifying and safe—devoid of the unhappy times that had ravaged their relationship throughout their early and middle adulthood. Albert Einstein summed it up succinctly when he wrote, “All knowledge starts from experience and ends in it.”