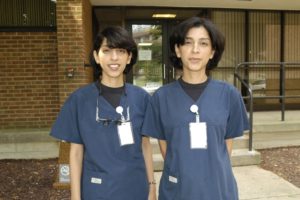 I am currently working with three women who are attempting to navigate the emotional turmoil wrought by their assuming a caretaking role with their identical twin sisters. The caretaker role in these instances means that one twin has sacrificed her own feelings and needs in the service of protecting and parenting her sister.

Each twin comes from a different background. One woman was raised in a rural area by a family that was disorganized and chaotic. The second woman grew up in a middle-class family with shifting family ties between biological and stepparents. The third woman came from an affluent area and had overprotective and unsophisticated parents. While their socioeconomic backgrounds and emotional histories are quite divergent, all three of them struggle to understand how their caretaking role with their sister has contributed to ongoing conflict and personal heartache.

I will give these women fictitious names in order to make the narrative more cohesive. Laurel grew up amid unbearable family chaos, which consisted of physical abuse, sexual abuse, and violence related to alcohol and mental illness. Laurel is now in her midfifties and courageously coming to grips with her traumatic life experiences. She desires to develop a close and trusting relationship with her twin, whom she feels she protected all their lives against the horrific violence and abuse they both suffered. Laurel suffers from overwhelming anxiety when she feels that her sister is struggling or unhappy. Laurel is aware that she developed a defensive demeanor so as not to be overwhelmed by her feelings. Her sister tells her that she seems cold, detached, overly intellectualized, and uncaring. Since their styles of relating are so very different, communicating with one another without Laurel’s sister becoming angry and untrusting is nearly impossible. Laurel feels that she and her twin have to learn how to listen to one another without their protective bravado.

The second woman, whom I will call Charlotte, is in her midforties. She is troubled because the sister she unselfishly cared for and protected all their lives becomes unpredictably critical and cruel at times. Charlotte does her best to stay in contact with her twin and relishes the times when they get along well. She is lulled into believing that the bond she has with her twin is peaceful. Then, out of the blue, Charlotte’s sister becomes nasty and reactive, accusing Charlotte of not loving her and taking care of her. To make matters worse, the sister often interferes with Charlotte’s marriage in inappropriate ways that further enrage Charlotte to the point of distraction.

The third twin, Carolyn, is in her midthirties. She is working through an extraordinarily painful and difficult break with her sister that occurred when her twin moved away to take a better job. Carolyn’s twin had always been her everything—her social buddy, her emotional anchor, and her physical security blanket. After the loss of her sister’s support and her caretaking functions, Carolyn had to fight hard to come back from the loss of an identity based on her twin connection. She is working hard to carve out her own sense of self—a difficult task when trying to play catch-up later in life.

All three women demonstrate tremendous courage in the face of traumatic circumstances as they struggle to reclaim the individual identities that were lost in subtle twin undercurrents.