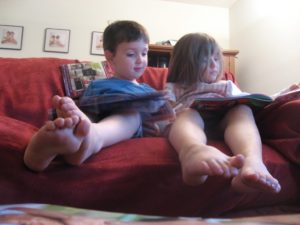 In 2015, Dawn Van Osdell from the online magazine UrbanFamily approached me for an interview as part of their Myth Busters series. UrbanFamily has graciously allowed me to share the resulting article about demystifying the twin mystique.

There’s a lot of contradictory and downright erroneous parenting info floating around out there. We’re not afraid to tackle it head-on!

Societally, we have a fascination for twins, likely because they used to be a pretty rare thing—only about 2 percent of births resulted in twins just a couple of decades ago. But today, due to women having children at an older age and to the continued rise in infertility treatments that often cause multiple births, we’re seeing more twins than ever before. And the likelihood of having twins continues to rise. Even as twins become more common, the mystique around them prevails and feeds misconceptions about what it’s like to be a twin—and about how to parent babies who are seen by the world as part of a pair.

To shed some light on the topic and the misunderstandings around it, we spoke with Joan A. Friedman, PhD, a psychotherapist and prominent twin expert. As an identical twin herself and the mother of five children, including two sets of fraternal twin sons, she is uniquely suited to the task. Here she sets the record straight about three common myths related to twin-dom.

Myth #1: Twins are always best friends and soul mates. If mine are not, I’m doing something wrong.

Truth: “There’s an idealized sense of what twins are supposed to be, including best friends,” says Friedman. While many twins are each other’s closest allies, it’s often because they are together so much—sharing a bedroom, classrooms, friends, and family. They are viewed by others—and even by themselves—as two halves of a whole. If they don’t live up to the stereotypic expectation of being a perfect match, their parents can feel like they have somehow failed.

Rather than try to force an exclusive friendship between them, Friedman says families should recognize that twin siblings are often torn between their strong connection to one another and their frustration over wanting their own friendships. “Break through the stereotype that twins should be inseparable and help them develop individual identities and friendships,” says Friedman. Helping twins individualize will ultimately help them adjust to separate lives when they leave home and go their own ways.

Truth: Friedman, who has talked with countless parents of twins, says she’s heard the claim that twins share ESP too often not to consider it with some amount of seriousness, although she doesn’t buy it. She and her twin do not share telepathy between them and there is, in fact, no scientific proof to confirm that that power exists. How then do you explain it when one twin knows what the other is thinking, picks the same shirt to wear to school, or chooses the same present for a friend?

“They grow up in each other’s face all the time,” says Friedman. There is a familiarity with each other’s personality, reactions, habits, and routines, and there’s a deep emotional attachment that produces a powerful empathy for one another. The phenomenon is similar to the connection an old married couple may have, and their ability to finish each other’s sentences and predict each other’s next step. Like twins, they share a strong tie—though it’s unlikely a psychic one.

Myth #3: Competition between twins is no different than rivalry between singleton siblings.

Truth: More so than singleton siblings, twins are under constant comparison from the world and positioned to fight each other for top dog status. “They are in competition with each other before they are even born, fighting for their fair share of nutrients in the womb,” says Friedman. Even twins who get along well grow up competing for their parents’ time and attention, for dominance, and for independence.

The competition is tough on twins and also on their parents, who often attempt to put an end to the bickering and whining the competition causes by struggling to treat each child fairly and equally. But, “When you’re invested in treating them both the same, it’s a death sentence for all,” Friedman says. She advises parents to avoid seeing twins as a unit and instead, focus on treating them as individuals with unique needs and abilities. “Champion personality traits, abilities, and inclinations and avoid labels and comparisons,” she says. Spending one-on-one time with each twin is also a helpful way to curb the competition.

Although, the rivalry isn’t all bad. “It’s very motivating to have someone to compete with,” says Friedman. “And if someone has to lose, it’s a little easier to lose when you’re losing to your twin.”