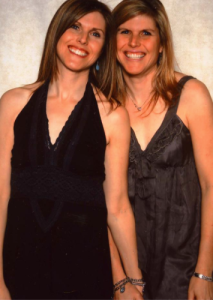 photo credit: Two of a Kind Documentary via Facebook

When I first read about a psychological process called pathological accommodation during my psychoanalytic training, I was struck by how it might also be useful in understanding some aspects of twin relationships. The concept originated out of the work of psychoanalyst Dr. Bernard Brandchaft. Dr. Shelley Doctors, another prominent psychoanalyst, describes how to understand this dynamic in terms of the mother-infant dyad:

You might think about this dynamic when you meet or hear about twins who cannot live without each other. Such a pair was featured in Leora Eisen’s documentary film Two of a Kind, which aired on Canadian television last November. Eisen is a writer, producer, and filmmaker who happens to be an identical twin. She showcased different twin relationships to illustrate how variable they can be.

Laurel and Allison are thirty-year-old mirror twins who live in Canada. In the film they talk about how they wish they were conjoined twins. They have only been away from each other for four hours in their entire lives. They eat, exercise, sleep, and work in perfect synchrony. They create artwork together and are also studying to become teachers together. While they have been treated for depression and diagnosed with obsessive-compulsive disorder, both women have accommodated themselves to this life together in spite of their parents’ unsuccessful attempts to help them live a more separate life. The women are annoyed that outsiders think their relationship is strange or freakish. While they realize that their twinship is outside of the norm, they plead for tolerance and understanding.

This twin connection is a prime example of a relationship whereby severe pathological accommodation has stripped both women of a single identity and replaced it with a fused identity that defines and connects them. In healthier twin relationships this dynamic can be explored in psychotherapy.

As clinicians treating twins are well aware, a profound emotional change in one twin usually triggers temporary upheavals in the twin relationship. While Laurel and Allison may fear them, more often than not, these systemic changes lead to improved relationships because a more separate sense of self is defined and operative for each twin.