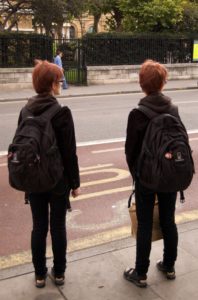 The struggle to feel like a separate person after years of being a twin involves hard work, motivation, and insight. A young woman in her midtwenties has been working diligently in therapy to feel distinct and differentiated.

The other day in our session, she was describing an epiphany she had while she was helping her sister move into a new office. Understandably, her sister was stressed and overwhelmed in view of her situation; characteristically, she snapped at my patient and treated her rudely.

Suddenly my patient became aware of her singularity. She explained to me that—for the first time—she was seeing her sister from the outside. I needed some clarification about this remark because I was not exactly sure what she meant. She told me that she recognized that her sister’s bad mood and anxiety had nothing to do with her; she realized that she was not the source of her sister’s irritation and frustration.

Somehow at that moment, a spark of clarity ignited my patient’s capacity to view her sister as separate—as outside of her. While this may appear a bit bizarre and simplistic to nontwins, it makes beautiful sense to those of us who have struggled with defining ourselves outside of our twinship.

My patient had shared in earlier sessions that she and her sister were incapable of collaborating together on projects that they both enjoyed. She had shouldered the blame, believing that she alone was the reason that they were unable to work together. Witnessing her sister as a separate person in that moment mitigated her old feelings of guilt and self-loathing.

Both of us shared the hope and belief that this reconfigured relational sense of herself would enable her to move forward with new intimate connections.