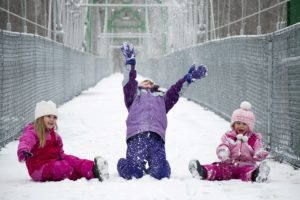 With the author’s permission, I am sharing a paper she wrote this summer. Gwendolen Huo is a sixteen-year-old identical twin who has an interest in exploring her relationship to her twin and their older sister. I trust you will appreciate her burgeoning efforts to articulate her emotional perspectives.

Two Is Better than One, Right?

Two pairs of feet, each with crimson red flats, marched forward together in unison. Further up, the two are wearing identical scarlet dresses rimmed with white embroidery and the same blue denim jacket. A second look, and it’s obvious that the two girls look like clones. My twin sister, Fiona, and I have never gone in public without the same outfit on. That’s a fact. Now you’re probably wondering, “Don’t you guys ever fight over what to wear?” Of course we do, but we would rather be discontent with what we’re wearing than be seen wearing different outfits. This means that whether there’s a clear blue sky with white fluffy clouds or a sky filled with tumultuous, dark, ragged clouds, Fiona and I will be wearing the same outfit from head to toe.

Besides wearing the same clothing, Fiona and I take our twinning to the next level through developing our own language, personalized body movements, and even our own extraterrestrial world, which includes our own religion and customs. In contrast, I rarely share these kinds of amusements with my older sister, Lydia, who is two years older than me. In fact, we can go days without speaking to one another, each minding our own business. Though there are benefits to my relationship with Lydia—one being that I find myself never in competition with her. Therefore, we’re always looking out for one another.

The relationships between twins can many times be thought of as mysterious because twins often think of themselves as each other’s best friend. However, when people think of other sibling-sibling relationships, such as an older brother with his young sister, they generally will think that the two just look out for one another. In contrast, twins often care about their other half more than themselves. By taking a deeper look into twin relationships, we can better understand our relationships with our siblings in general.

On our first day of kindergarten, Fiona and I were told that we would be split up, each in a different class. It was the first time except at birth where we would be spending more than two hours physically apart. Although I don’t remember a lot from my first day, I will always remember my deafening cries as I was ushered into my new classroom without my Fiona by my side. I only stopped crying after an hour or so through the comforting of both my mom and a speech teacher; nevertheless, I still remember feeling an utter emptiness throughout the entire day. While I’ve gotten used to not always being around Fiona, I still constantly worry about her more than anyone else.

What makes the relationship between twins so different than other relationships? One possible answer offered by an article titled “Relationships; The Impact of Twins on Siblings” from the New York Times suggests that older siblings who have twins as younger siblings oftentimes feel immense jealousy because they have to share their parents with not only one but two other children. As stated by Dr. Herman Roiphe, a professor of psychiatry from the Mount Sinai School of Medicine, “The special challenge of the singleton is the fact that twins are somehow bound in exclusive closeness that locks everyone else out.” After reading this statement, I thought about my relationship with Lydia, which is like a procrastinator’s relationship with homework—I only interact with her if it’s necessary or I feel guilty for ignoring her.

After reading about the unexpected harm twin sibling relationships can have on other sibling relationships, I decided it would be perfect to interview someone who specialized in twin studies. My researching led me to Dr. Joan A. Friedman, a respected psychotherapist and author, who happily agreed for me to interview her on short notice. I started off by asking her if she noticed any differences in the relationship between twins versus with their siblings. Dr. Friedman began her response with a definite yes and added, “When talking to parents [of twins] they very much mention that with girl twins that have an older sibling, it is much easier for the older children to feel left out.” I was able to instantly relate her words to my life, where I end up accomplishing all of my milestones with Fiona and none with Lydia. This made me feel extremely guilty because Lydia, being older, has taken care of me many times despite having autism.

Subsequently, I decided to have a quick chat with Lydia to see if what the experts stated was indeed true with my family. I started by asking Lydia, “Have you ever felt alone or isolated because of my relationship with Fiona?” She took a moment to think but told me, “No, I have Ms. White Bear, and I’m a twin too.” This response startled me, as I realized a greater reason behind Lydia’s response: she was indeed lonely and wanted to replicate my relationship with Fiona, except Lydia’s twin is a three-foot-tall, furry stuffed bear that Lydia loves dearly. This made me realize that she was jealous of how I acted around Fiona and hoped to have the same relationship as well.

The rate of American couples welcoming twins into their families has been on the rise, with more than 133,115 pairs of twins being born so far in 2017, according to the Centers for Disease Control and Prevention. Although this number isn’t extremely high compared to the total number of births each year, the numbers of multiple births have been increasing steadily over the past decade. Now that we expect more families to include siblings who may happen to be twins, it’s about time to focus on how sibling relationships will change because of this. As learned through this exploration, it is likely that there will be a greater divergence between singleton siblings and their twins because the single sibling will feel left out and alienated by his or her twin siblings.

Now reflecting on my research, I’ve come to realize my position when it comes to being both a twin sister and a sister of a singleton. I’ve realized that I’ve been incredibly biased when it came to treating both of my sisters. My takeaway from this exploration? As a person who greatly values her family, I should value what both of my sisters have to offer to me. Each of them is able to help me greatly, whether it’s emotionally or academically. Through interacting with both of my sisters, I can learn more through both of their experiences.