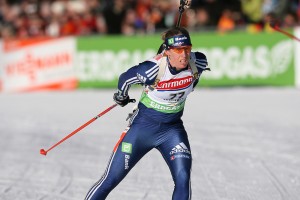 How do we understand this headline?

Competition between twins is built into their relationship. It can be a terrific source of motivation and camaraderie. As the Barnes twins attest, they have trained together for 15 years and have been each other’s strongest advocate and inspiration. Tracy’s decision to give her Olympic spot to her sister, Lanny, has been touted as one of the few feel-good stories for a Winter Olympics sullied by security fears and antigay rhetoric.

Those of us who work closely with twins are not surprised by Tracy’s magnanimous gesture. Many twin pairs who train together will often remark that if one of them has to lose, they are content to lose to their sibling because at least one of them is the winner. The defeated twins seem to feel less troubled by their loss if their sibling is victorious. There is an inexplicable sharing of joy and sorrow.

We certainly do not expect to see this altruistic behavior when the Williams sisters play a tennis match against one another. Both Serena and Venus play to win, no matter what.

Nonetheless, twins often experience difficulties around competitive issues. One male twin said that he lets his brother win video games because he cannot tolerate his brother’s negativity when he loses. Another twin told me a story about competing against his brother in a diving match. His brother, who was eliminated from the competition, was going to videotape the competing twin’s championship dive. However, the pictures were never taken because his brother “forgot.”

Another twin was not selected to play varsity soccer because the coach did not have the courage to tell her twin sister that she did not qualify. So neither one played. And a female twin told me that she was not allowed to eat many of the foods she loved because her twin sister was allergic to them.

Competitive issues are an integral part of the twin connection. It can be very problematic when one twin is successful and the other is not. Altruism hides a number of sins. Anna Freud talked about a defense mechanism she termed altruistic surrender, whereby a person avoids personal anxiety by vicariously living the life of another person. Something to think about the next time we hear about another selfless twin tale.